Body Boat Blade has released their new Sea Kayak Rescue DVD. Shawna and Leon showed a brief preview of the video at Canoecopia at the beginning of the year.

The premise of the video is really simple, but also really cool. From a coaching perspective, this is usually the case. The premise is that rescues are actually very simple. The catch is, there are techniques and tactics that work well on flat water, some that work ok on dynamic water, and some that work in rough water. I liked this premise and this simple presentation.

Shawna and Leon run through a series of rescues on flat water, including a rec boat rescue, which I thought was terrific to have in a video. I wanted to see the words “never before seen on TV” when Leon did an assisted t-rescue with a rec boat. Watch the technique when you buy the video. (Notice I said when, not if). The information is really well presented, and presents some controversial topics in a very pragmatic and non-dogmatic way. For instance the issue of rescue lines and toggles is covered in a very straightforward way, without making a judgement on the craft itself. Watch it and you will see what I mean. 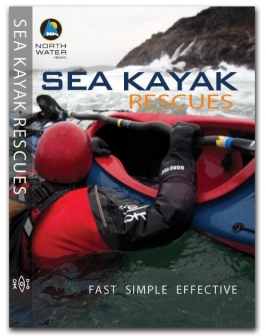 The thought and passion from Body Boat Blade put into the topic of sea kayak rescues comes through. The quality of the filming and the beauty of the locations makes for great viewing. Familiar sea kayak park and play spots such as Skookumchuk and Deception pass should be readily familiar to viewers when they see rescues taking place. The camera work from Bryan Smith is top-notch, and the fact that he is a paddler puts the view of the camera right at eye level when needed, and further out when it matters.

While a rescue video could cover any number of complicated scenarios, alternate rescues, or other topics. But at what cost, the razor focus on rescues makes the film imminently watchable and valuable as both an individual learning tool, and as a coaching tool.

I remember a paddling.net message board thread from about three years ago
where a potentially helpful post got a bit long and a bit snarky. One guy actually said, “All of this talk for a t-rescue? Sheese it’s just a t-rescue.” But maybe the thing we depend on the most when things go wrong should have this kind of thought and focus put into it more often.