I find myself becoming more and more irritable on my morning bike commute. Drivers who use cell-phones, that do not look where they are going are trying my patience. This morning I made a critical mistake. I think if I had changed my position in the lane to be more direct and visible, this situation might have been negated.

I had my modified Bianchi San Jose with pannier bags loaded this morning. Laptop and clothes for the day in the bags, and I am heading downhill to a stop light. The stop light has some construction going on in the middle lane. I rolled up in the right lane first at the light. I was off to the right of the lane, which was my first mistake. I should have been in the middle of the lane. A woman from the center lane under construction started edging her SUV into the right lane. She rolled forward but needed me to move to turn right at the red light.

She actually rolled down the window and tried to sweetly ask me to move so she could turn right at the red light. “No!”, I told her. She could wait for the light to turn green like everybody else. If I had been a car she could/would never have done this.

My mistake was in being off to the right if I intended to go straight through the light. I was asking for it. Lesson learned occupy the center of the lane when you intend to go straight. 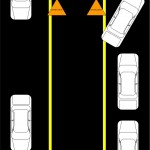 Good Position for a Bike in Traffic going straight 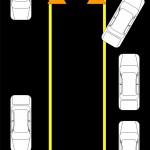 Certainly the second diagram is more aggressive in terms of the positioning in traffic, but hopefully safer. The object is not necessarily to be in the center to let the car through on the right, but to clearly occupy the middle to let the car know you are going straight.