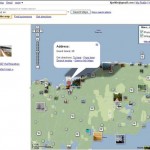 I often daydream by looking at maps, wondering what places look like up close, what it would be like to visit. Web search has existed primarily as a textual experience since my first use of it in 1994 at MSU. I remember using Netscape and a MAC in a computer lab at MSU to search the Ultimate Band List. The web has increasingly become more visual. But search has remained a textual experience. Meaning to find content, the user must type text in a box to receive a textual results set.

William Gibson in his 1984 Novel Neuromancer envisioned a sea of icons and symbols, and 3-d images in cyberspace for hacker cowboys to sift through and interface with. Bobby or Count Zero in the sequel to Neuromancer is barely literate, but he can interpret the hieroglyphs in the net with ease.

Google Maps new feature where the user can view images and Wikipedia entries is a step towards a visual user experience of the web, rather than a textual one. This move, for better or worse, I think represents more closely how the brain works. I think the human brain works closely with a combination of images and places more so than it associates text to results. As most of the user tests indicate that users type very broad search terms to begin with, and then narrow down their search terms as they progress towards a final result set, I think this hypothesis makes sense. If a user had a visual map of the subject of their search, they might be able to find content that is more meaningful with greater ease.

Another good example is the Web MD symptom checker. However it is pretty limited in it’s functionality. Imagine merely opening your browser and using a human body to click on where it hurts, and then narrowing your search based on the visual representation of the anatomical area? In light of my recent injury, searching for the name of the tendon that hurt was painfully awkward. It might have been easier to simply visually navigate to the area that hurt and then narrow down from there. Granted there is no real panacea against text searches, as we are linguistic animals as well as visual ones. But a combination of the two would certainly allow the internet to service varying levels of literacy and search behavior.

As to the functionality itself? I was searching for Grand Island in Lake Superior and found the more tab. I clicked and then watched all of the little icons appear on the map. It’s a good user experience. Wikipedia is obviously a mixed blessing as anyone knows. Whatever users create for that entry is what’s listed for better or worse. The Wikipedia articles open in window and can be easily dismissed. The google image results are from Panoramio. My only head scratcher is wondering if these are the the most relevant, most visited, or specially selected by Google to appear for that location?

I am a huge proponent of literacy, but also a big proponent of usability. Not everyone’s brain works the same way, and the internet should service everyone. Hopefully this tangential development is part of a larger area in Google’s future for vertical and blended search. My other hope is that a non-commercial version of this remains intact with the ability to toggle ads on and off. Despite my occupation, I would hate to see weekend cottage rental advertisements littering a search for information about an island. Context is very, very important.

My favorite part so far is watching the map become sparser and sparser for information as you scroll very far north, or very far south.