Kayaking the Superfund Sites of the Kalamazoo River

John Fleming and I both had a hankering for some river kayaking because our beloved Lake Michigan is still encased in ice several hundred yards straight out. However that may be changing this week. We met at the downtown Waterstreet Coffee Joint.

I had some tea and a rosemary shortbread cookie.

John and I braved the cold and suited up near the big train bridge. We paddled up stream, stopping to take photos of the amazing scenery under bright sunshine, but bitter cold wind.

We eventually came to the small train bridge. Which has a significant log jam on the other side. This causes the current to speed up quite a bit. There was a sizeable eddy to hold in and then a good swift part ahead of the bridge to whip your sea kayak around and then downstream. It was good practice breaking in and out of the eddy line. I also practiced my ferry gliding as well. If you hit it just right you could ferry across, paddle upstream, and then have your bow catch on the current to whip around down stream. Once on the downside if you could have your tail skid out on the eddy and then start over. I only managed to do this perfectly twice. Considering the water quality, we elected not to screw up and wind up capsized. We thought this was quite wise.

John kept on saying Superfund, when we came by something like this: 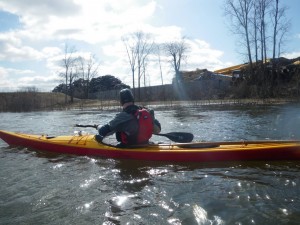 I thought John was saying Superfun. I thought alright, this guy is super positive about everywhere he paddles, that’s awesome! Turns out he meant EPA Superfund. The Allied Paper site is one of many Superfund Sites on the Kalamazoo River.

Check them out, and then wonder why a city that is doing much better in terms of attracting downtown visitors and business would have such a horrible pollution problem. While I am making jokes, I am not really. We could have a beautiful downtown riverfront experience.

We had a Kanoo the Kazoo cleanup effort going on for a while. Chris Mobley and I cleaned up a bunch of tires, plastic bags and fifty gallon drums out of the river. But I think this is really a superficial cleanup of what hard industry did to the river for almost a century. The PCB’s in the soil and the river sediment are the problem, not the trash on the surface. Perhaps some bailout money could be spent really cleaning the river?… Here is the Community Involvement Link from the EPA website.

Check out the photos for the full glory of the Kalamazoo River Superfund Paddle.

5 replies to “Kayaking the Superfund Sites of the Kalamazoo River”