I think I had been focusing on some negative things since about February. Being injured and incapable of doing the things I love made me a bit cranky, and sometimes hard to be around. I did have a series of horrific incidents all in one fell swoop. Incapacitating abdominal and groin pain that led to a hernia.

I ended up having surgery for the hernia in April right before WMCKA Symposium.

And then my ultimate frisbee season began. Whoa nelly! Torn tendons and cracked ribs ensued. Leading to many weeks of inactivity in prime season for paddling. I am not necessarily giving up on frisbee, but I may be less focused on being an aggressive hucker and diver. I don’t need to be the lame 35 year old guy laying out for discs.

I got up on January 1 2009 in my mildly hungover, (ok way hungover state) and had some waffles and bacon. Tim Brady, my neighbor and running buddy came over and reminded me that we were going to do the 1:1:1 fun run. I changed in a flash and was in his car headed out to Borgess soon after. When the run started I was trying to hold down my waffles and bacon for the first 2 mile loop. But soon settled in to a good pace. While out there I had one of those epiphanies you only have while running.

I think I’ve been a little hard on myself about my training, running, and perhaps even paddling. I get in my head that I am going to go out there and push myself as hard as I can at all times. And sometimes as is the case with frisbee this gets me hurt. With paddling this leads to me breaking paddles and getting sucked out of the kayak in 12 foot surf.

My first thought for myself this year is that sometimes it is enough just to get out there. I don’t need to be out front. I don’t always have to be that lone silhouette at the horizon that everyone is watching to see if they die on the next set of waves. This isn’t to say I have backed away from taking on new challenges or from risk taking in general, but that perhaps it is time to start picking my moments. A 35 knot wind with 10 foot on shore waves isn’t going to do it anymore. But a northerly twenty knots with a clean 6 foot break around the pier will.

So thought number two thought I will share that may seem in direct conflict with the first I am going to attribute to Leon Somme. Apparently he heard from an elite athlete and motivational speaker in Bellingham Washington that their approach to competition and life is all about self-image and what they believe they can do versus what their injuries and failures have told them they cannot do. Strangely this came up when I saw Leon’s height listed on the door jamb in the Body Boat Blade shop. It said 6 feet. I looked at Leon and he is about my height. So I asked him how he got to six feet tall. And he explained that he believes he is six feet tall and therefore he is. I thought about this in terms of the number of times I thought about this a lot over the holidays when I decided not to run or bike because I was afraid of putting in too many days and injuring myself again. When in this six foot tall mind frame. I will never be able to do it if I don’t believe I can do it. I am not saying I am going to hurt myself because I believe I am invincible quite the opposite. I am just not going to sit on my ass everytime I get an ache. I am going to do whatever I can do without hurting myself. If I can only run 2 miles without pain that is exactly what I am going to do until I can run without pain. And this is because I believe I can come back from all these injuries to do whatever I want. So many people have told me I should quit running or frisbee, or whatever. Maybe I should, but it just isn’t in me to quit something I love.

I ran a slow 36 minute race over a 4.3 mile course. And for a guy with a screeching hangover and a better chance of hurling his breakfast in the bushes than of winning his age group I felt it was a fairly good accomplishment. I won the 35 year old hernia repair, torn tendons, cracked ribs, and completely hungover because he stayed up all night drinking bourbon with his wife and his best mate division of the 1:1:1 run. While there is no medal for this event, I will say the efforts are their own reward.

Oh and by the way I too am six feet tall. Check out this picture of me next to Josh, he’s six feet one. 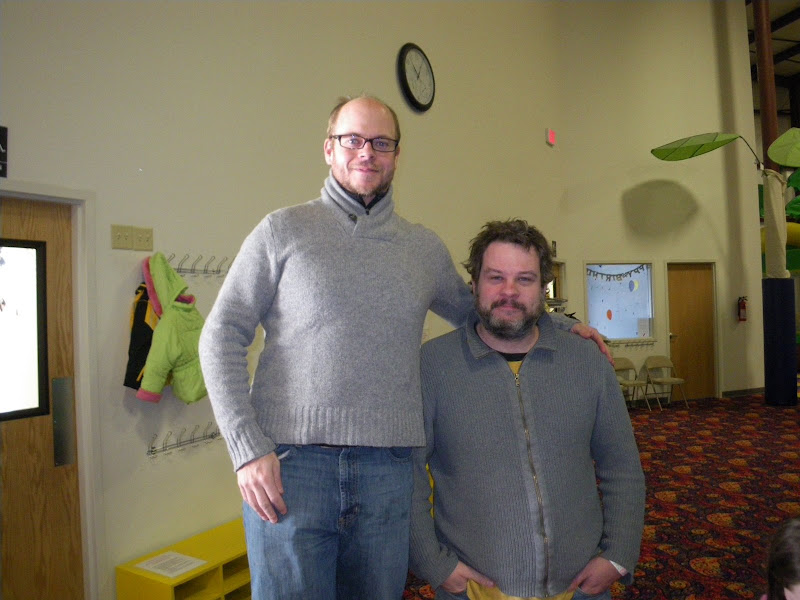