As a Great Lakes Surf Kayak enthusiast, I am fortunate enough to make it out to California once a year. I usually beg, borrow, or rent a surf kayak and head off on my own to a local break. This year I decided to be a little more organized. I contacted Sean Morley of River and Ocean Kayaking I have had plenty of sea kayaking instruction, but literally no surf kayaking instruction. I’ve never had anyone look at what I was doing to see if I could do it any better. I’ve watched lots of Youtube videos and a few surf videos and then I always watch what boardies are doing when I go out. They tend to have good positioning instincts and are invaluable for good information on where to take off. But good instruction is key to being effective in a shorter amount of time.

Sean Morley, who is an amazing sea kayaker as seen in Justine Curgenven’s This is the Sea II, is also a competitive surf kayaker. Sean was world masters champion in 2007 in the HP (high performance category) in Mundaka of the Basque region of Spain, as well as placing in many other competitions. His wife Gina is also a world reknown surf kayaking champion.

Sean having organized the massively successful Golden Gate Sea Kayak Symposium, only the week before graciously drove down to Davenport Landing to meet me on Saturday morning. After looking at the large, but lumpy waves at Davenport Landing Sean suggested driving down to Moss Landing south of Santa Cruz. Having run the gauntlet at Davenport Landing in 2007, I was not anxious to go back there on a big day to get tossed over the rocks. Little did I know this would happen anyway.

We drove down to Moss Landing. There were at least six other surf kayakers in the parking lot along with a lot of other boardies. Sean got me situated in his Murky Waters Agua Libre. We headed out onto the beach break. Sean gave some great instructions on positioning, and how to use different waves for different purposes. For the wave at Moss landing, Sean advised to stay high on the wave, rather than dropping in to the bottom right away, and to run it down the line until it started to close out and then, in his words, “smack the lip” and pop off the shoulder. It took quite a few missed take-offs, one swim, and a few poor wave selection to get it. And then finally while Sean was in the white water paddling back out, I hit it, dropped in, and rather than dropping down to the bottom of the wave, as is my instinct, I grabbed a wave, hung high near the lip and screamed down the line until it started to close out, I dropped down into a bottom turn and was wiped out by the foam pile, but I had done it. I got a whoo-hoo from Sean. He came over and advised next time when the wave starts to close out to flatten out my hull and accelerate at the crest, in order to fly right off of it.

Here Chris Harvey has the boat presented flat to the wave face despite moving laterally along it, he is using his paddle downwave for support.

This is a difficult concept to grasp without actually seeing it. The general instinct is to hold the rail into the wave face so that the boat has grip, you can use your paddle for support as is shown below. .

This is completely counter intuitive, but the boat when flat will accelerate harder due to more planing surface and less resistance, and it allows the paddler to launch off the lip and get airborne.

This day was full of lessons like this. I would launch off of a wave, wipe out, then get washed in, paddle back out to try again. Sean would offer advice about boat positioning, how to sink the tail for takeoff, bunny hop over foam piles, all sorts of stuff that I had seen, but didn’t know what it was.

We came back after lunch to see a windblown swell with a lot of “juice” in Sean’s words left in it. I tried out Sean’s IC boat the Salsa to limited effectiveness. I had tons of hull speed, but with no fins, you are left to rails, edging and paddle strokes to control your boat. I managed to catch a lot of waves and then wound up surfing backwards on a lot of them. As I edged I usually found myself upside down before I hit the sweet spot on the rail. I really loved that getting off the beach was easier with no fins, but it was a totally different, looser experience to surf an IC boat.

Day 2 began at Davenport Landing. It looked blown out and small from the beach. But the forecast said 6-7 foot swell. Sean and I suited up and paddled out on flat water to the outer part of the break that was closer to the deep water channel. My stomach was clenched in knots knowing that if I had a bad wipeout with a swim, a dashing on the rocks might be on the menu. I surfed way deep and close to the channel so I could shoot left and be out of the path of the waves headed over the table of rock. I caught one or two short rides like this until Sean urged me further towards the point and into deeper water. We waited for quite a while and then Sean would shout “outside” once every few minutes. Outside meaning a larger than average wave was going to breaking right where we would be sitting if we didn’t move it. So I would paddle like hell and then climb a ten foot face praying to God I would make it before it started to curl. I saw Sean dig his tail in and catch one of these monsters and scream along to the outside into deep water.

I plucked up my courage dug in and paddled for one, leaning way forward to weight the bow, following the advice to stay high on the wave rather than dropping way down, I angled my takeoff to the right. I dropped in and screamed right at what seemed like the speed of light, and there just never seemed to be an end to the wave, it just kept spilling and spilling as a mountain of a swell finally closed out behind me. Unluckily the foam pile caught me, and drove my rail under and I wiped out. I rolled up into the foam pile and surfed off into the deep water channel. It was definitely the fastest I’ve had a surf kayak moving on a wave. The power of Pacific swell really can’t be compared to short period slop on Lake Michigan, though it humbles me to say it. As I looked out by the point I could see small mountains of swell crashing in to the rocks. Needless to say I paddled back out to catch another one.

Sean and I paddled a bit further out to the point. I was caught inside on another huge wave, I could do nothing but run with it, so I turned and paddled like hell. Unfortunately the nose of my boat dug in and I was cartwheeling in towards the rocks with wild abandon. I managed to roll up into the foam pile, and then surf laterally off the rocks into deep water.

I caught one more ride like the first, and then paddled back out. Until I heard Sean shout outside again. This time, with a bit of advice I weighted the boat back and then paddled like hell to run with it, the boat managed to stay upright and I was merely surfing wildly out of control but upright. I got my wits about me and began carving right like the dickens away from the cliff wall. I wasn’t going to make it, I was too far inside. I started looking for a good place to bring the boat in without damaging it, I spotted a beach along the cliffs where it looked like I could hike back to the main beach. I dropped a hanging draw as I was surfed in to stay off the rocks and then steered away from the rocks and popped out on the beach. Sean was probably relieved to see me and his boat in one piece when he surfed in to see how I was. We decided to call it a day as the surf wasn’t getting any better. He was probably never happier to see a student roll up and stay in his boat.

I walked away in sheer awe of Sean’s surfing ability. He would drop in on a massive wave drop down the line and the fly off the lip getting air like a kid on a skateboard ramp. He was undisputed master of his domain. He was doing this on small waves as well as large ones. I certainly aspire to one tenth the competence he demonstrates unconsciously. He was gracious with his praise and pointed out quite a few of my weak spots. Hopefully I represented the midwest well. While the Great Lakes certainly doesn’t have massive 13 second period swell, we can surf the waves of our lakes and build our skills within spectrum where we can at least paddle out and catch a wave without disgrace.

I highly recommend heading out to San Francisco for either Surf Kayaking or Sea Kayak Coaching with Sean Morley. His experience with moving water and racing make him an invaluable resource for your paddling. I hope to make it out to the Golden Gate Symposium Next year too! 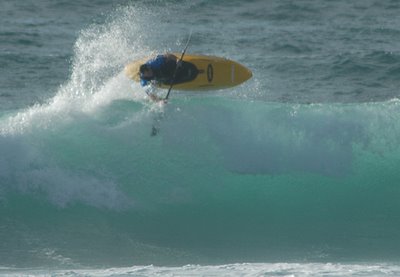