Ever wished for a bat mobile, or an x-wing fighter? Maybe a Mehve glider from Nausicaa of the Valley of the Wind. 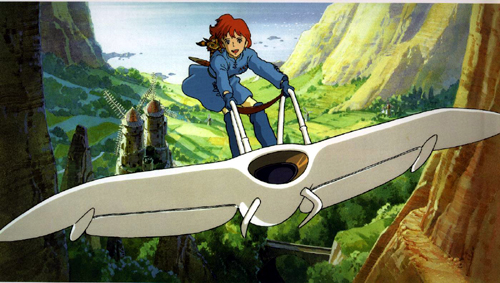 The 1984 film of Hayao Miyazaki’s graphic novel captured my imagination as a child. The giant airships, the toxic jungle, and most of all Nausicaa’s Mehve or Mowe glider. I really like the German word Mowe, as it means seagull, which is what the glider looks like when you see it. The Graphic Novel is probably one of the best things I’ve ever read. For me it is up there with Spiegelman’s Maus.

The Graphic Novel is a tale of the after math of a major ecological disaster. In this story humans destroyed the world in seven days of fire. The remainder of the human population is now threatened by a toxic jungle filled with giant insects and miasma. The major nation states are now vying for the territory that is left as the toxic jungle increases in size. Nausicaa is from the Valley of Wind, a small fiefdom to the kingdom of Torumeka near the acid lake. Winds off the acid lake keep the miasma and jungle from encroaching on the small jungle. War finds the Valley of the Wind and young Nausicaa a girl with a special telepathic link to other living creatures. She is thrust into the conflict between Torumeka and Pejite and manages to create her own side in the conflict striving to live in balance with the new eco system that was created after the seven days of fire.

These crazy Japanese guys have built up a working model of Nausicaa’s enigmatic Mowe. The gap is closing on my childhood dreams. What’s next? A real lightsaber? Maybe it’s better that we don’t get those…

Check out the test flight video of the Mowe.