Power, Stability and Control through linked strokes for kayaking

For Canoecopia 2013, I elected to put some thought into linked strokes. I love teaching blended strokes for kayaking. It is a surefire way to get students working on blade awareness in the water. As most of us learn strokes, we tend to think of them as separate entities, or islands in a large ocean, instead of an archipelago. It is fun to watch beginning students take a forward stroke and discreetly switch gears to a sweep stroke, and then a draw stroke. So offering them the possibility of one continuous stroke that gets the job done and provides support is a great moment as a coach. So with this thought in mind I presented Power, Stability, and Control for Linked Strokes in the pool at Canoecopia.

The objective of the lesson is to introduce the concept of an active, loaded blade in the water, and engaging the body in the kayak to drive, support, and control the kayak in a wider range of application than any one stroke alone.

When we think of what types of strokes there are, it can be broken down in a variety of ways. The simplest way I could think of breaking them down was into: Power, Stability, and Control. I will lay out each type of stroke and explain their separate roles and then introduce how each could be linked. Each stroke set serves a different purpose with advantages and disadvantages. 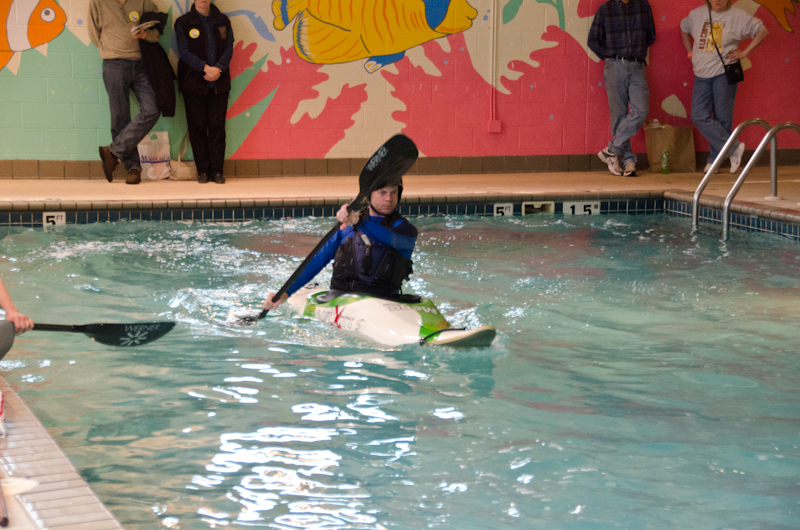 Power comes from the face of the blade when it is applied along the linear axis of the kayak, or along the kayak. But that power is muted when the foot is not driving on the footpeg. With the foot driving power transfer from the foot to the leg, to the hip and pelvis, this engages your skeleton in the kayak giving torsional power. Rotating your torso when reaching for the water provides even more power from larger muscle groups as you unwind through the stroke. This works in reverse just as well off of the reverse power face of the blade. Entire videos and articles have been devoted to the science of forward stroke, what we care about here is that the body is engaged in the kayak with the foot on the peg, and your power face blade is loaded and engaged in the water. This provides some serious advantages as a group of strokes. You are rapidly accelerating the kayak, the blade is engaged and so  is the body in the kayak. Just like an actively paddling cyclist at speed with a leg providing power on the crank is hard to just knock over, the same is true for the paddler who is driving with their blade in the water. Disadvantages are fewer but obvious, you sometimes need something other than speed, such as rapid turning, lateral slip, or support from the surface. 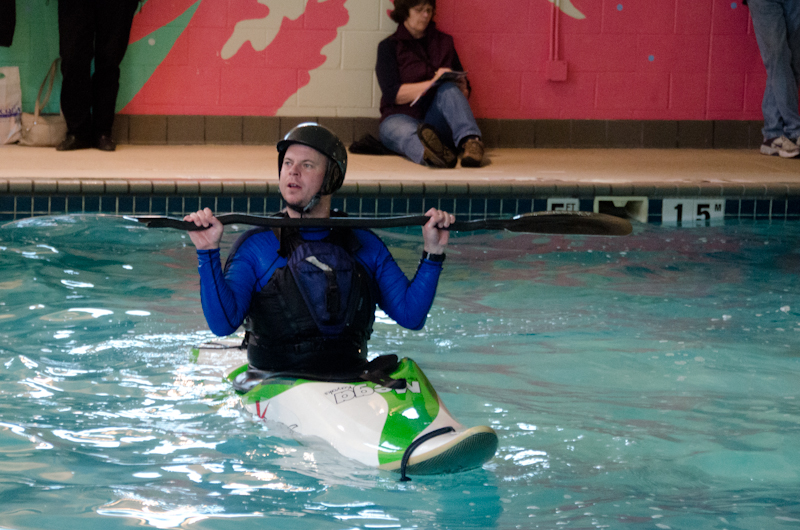 Stability comes from the face of the blade when it is presented flat to the surface of the water perpendicular to the kayak. Two support strokes are available, a low brace and a high brace.

The low brace is performed by presented the blade onto the reverse power face flat on the water, with elbows up and over the shaft in what I call the gorilla-knuckle drag. As balance is shifted from neutral over the kayak to out of balance over the water this knuckle drag position extends over the water in a quick support slap on the reverse power face of the blade. The body has to start curved over the kayak away from the water with your head tucked to your shoulder. As the support stroke is applied a leg drive inside the kayak with the knee driving into the deck  brings the kayak underneath you, and your body ends curved in the opposite direction. Your head must drop to the opposite shoulder to allow the kayak to settle without capsizing. This should be a quick support stroke for situations where your are suddenly overbalanced.

High brace is performed by going into the pull-up position elbows in with the power face down towards the water. The motion of the paddle presented flat, the body curve, and the leg drive inside the kayak are all identical to the low brace, but instead of a quick support stroke from a low brace, the paddler commits themselves to support in a high brace position arms up. It’s very important to stay inside the proverbial paddler’s box in the high brace as there is a lot of torsion applied to the limbs from this position. It’s also technically speaking half a roll. This is a great psychological reinforcement for developing paddlers learning to roll.

The brace stroke, or support stroke has almost infinite applicability, but I like to say that which brace is used depends on the size of the problem. Problems that are roughly head high can often be solved with a low brace, problems that are over head high often result in a high brace. This is not a hard and fast rule by any stretch, but shapes some ideas on which brace would be used where.

A support stroke has great advantages, it supports the paddler from an out of balance position on the water in the kayak. The blade is presented flat to the water for a great support position and allows the paddler to get their torso out over the water while the kayak is brought underneath. Disadvantages for this set of strokes are pretty clear, once you are committed with your body over the water in the kayak, it support must be provided or you will go over, and your ability to introduce power or control is limited. Once you are headed over, if you are simply bracing repeatedly you are likely to go over again. 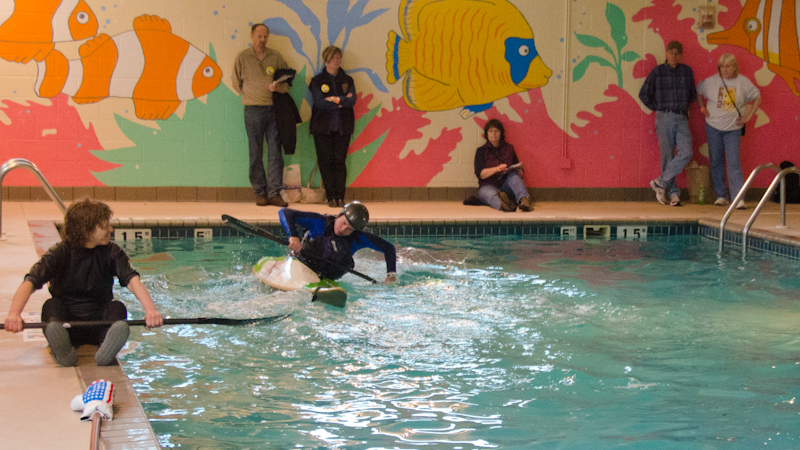 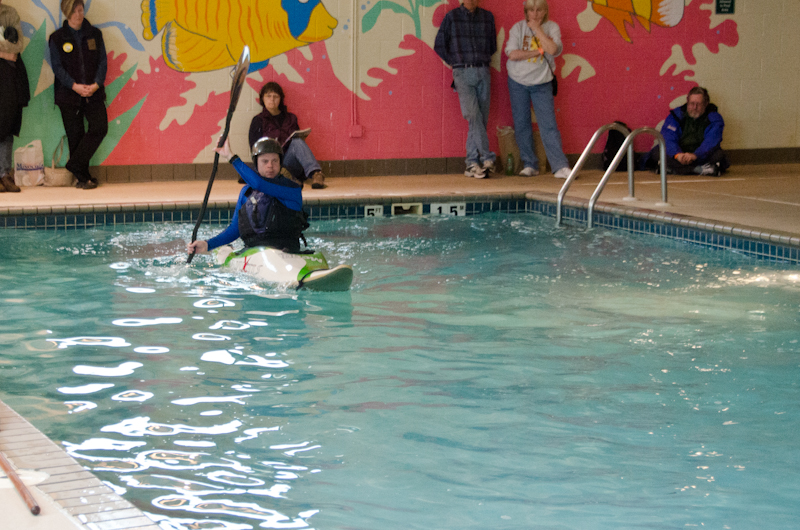 Control is the last set of strokes. Control comes from the tip and edges of the blade. Where power comes from the blade being loaded on the face along the linear axis of the kayak, control happens within the arc of reach on each side of the kayak. Good torso rotation again becomes key for getting the kayak to do what you want to do with maximum efficacy.

A control stroke can come from a  loaded blade, or an unloaded blade. Here are some examples of loaded and unloaded strokes. Wrist articulation is key for fine control strokes. Understanding how the control hand on the blade can control the blade and therefore the kayak when it has glide is the gateway to a whole host of new turning strokes. This also allows developing paddlers to begin using a loaded blade for turning strokes.

An unloaded blade control stroke can really only come from a situation where the kayak already has some glide. In this situation the paddler must rotate their torso to slice the blade in a neutral position and allow the tip and edges of the blade to draw water. This is most commonly done with a hanging draw or a draw on the move. The glide requires good  torso rotation and the vertical blade alongside the kayak. And any control from an unloaded blade comes from the glide.

Control strokes offer a ton of advantages for quickly turning the kayak with existing glide. Strokes where the blade is loaded next to the kayak such as bow rudders, hanging stern draws, rudders do put the paddler in a tricky situation where if put off balance it is very hard to recover.

Putting it all together

The real meat of the discussion is how each of these components can be added to your paddling to increase your power, support, and maneuverability.

Exercise 1 Power and Control
Once we start thinking about what each stroke component offers, when we venture out onto lumpy, or moving water, the components of adding power and control are pretty obvious, you can get the kayak moving and directionally control it. A great exercise that is fairly simple is a canoe J stroke next to a pier , or breakwall. Power is applied along the length of the kayak on the same side as the obstacle, and the control is applied as the torso rotates and the blade is presented on its edge in the water prying away from the hull to keep it in line with the pier. Doing this sort of stroke allows the paddler to gain forward propulsion and fine control with wrist articulation, combing two strokes into one. There are few disadvantages to this stroke technique

The simplest way to begin introducing support strokes into your paddling is the sweep skim approach. Begin with a forward sweep at a low angle out and away from the kayak all the way to the stern. This stroke turns the kayak, and then the paddler will adjust the paddle angle into a low brace position, (elbows up) and sweep it back with a support stroke skimming over the surface. This sweep skim approach introduces a support stroke for quick balance adjustment when the paddler has their blade in the water vertically allowing them to gain support when they are vulnerable to capsize.  This allows paddlers to begin the finer points of turning with support, and can also allow them to begin playing with the kayak on edge due to the support from the low brace. The now infamous Haghighi from Body Boat Blade is a variation on this stroke, yet this technique is a building block to an advanced maneuver.

Deploying all three strokes in one fluid maneuver is really the holy grail. There are endless combinations, but a favorite of mine in the pool is to do laps in tight quarters. Performing a tight lap with lots of obstacles where the paddle never exits the water on only one side of the kayak is probably the best exercise. A quick sampling of strokes might be forward stroke, transitioning into a hanging draw, then sliding towards the tail into a hanging stern draw, then slicing the blade out into a J stroke to pry the tail back on course. Then just to make it hard, slice the blade in the neutral position without taking it out of the water to begin all over again. Do this until you reach an obstacle and then sweep forward to avoid collision and then low brace skim back to the front of the kayak.

As with most strokes, games and play offer the best way to introduce these concepts. Games of redlight greenlight, or avoiding obstacles are great tools to gain confidence and have fun developing skills.

I had a great time putting together this presentation for Canoecopia and will most likely be giving it again 2 WMCKA  and GLSKS. Many thanks to Have Kayaks Will Travel for the assistance in the pool and the photos. 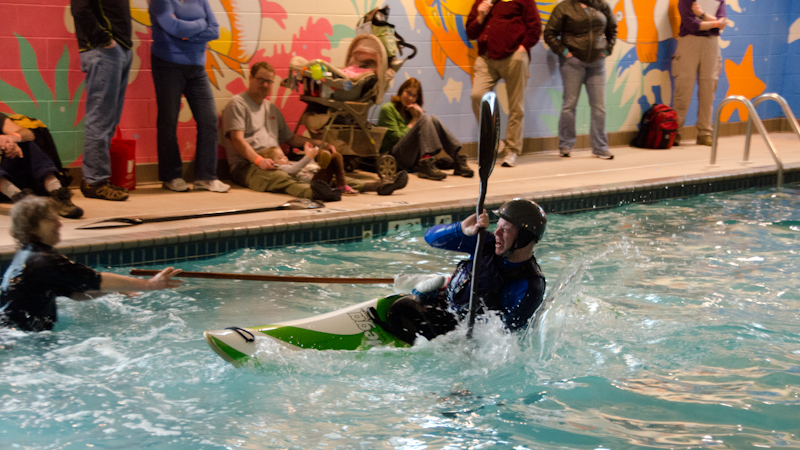