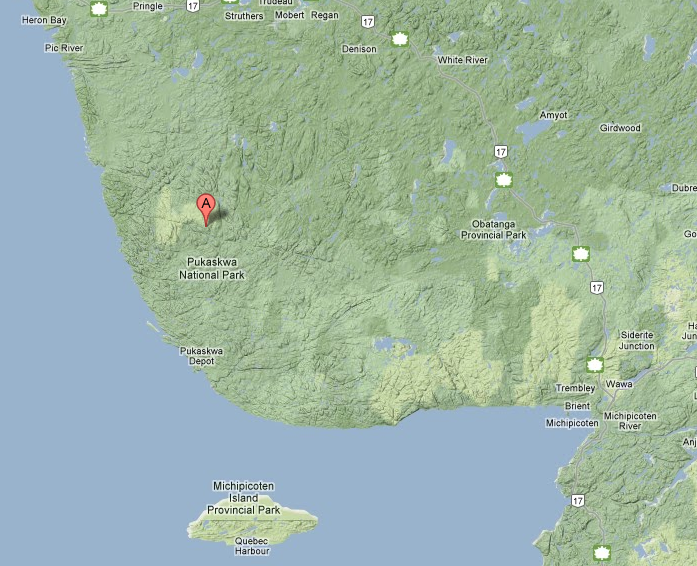 Pukaskwa National Park, and the remaining 50-60 miles between Pukaskwa River and Michipicoten is possibly some of the wildest country I have seen from the water in the Great Lakes. Bill Newman’s book Paddling Lakes Michigan and Superior lists this distance as over 100 miles. While this is strictly true from a nautical point to point distance, it masks the true nature of the trip.

Pukaskwa is a maze of pre-Cambrian granite, and volcanic basalt from eons ago that were pressed down by the glaciers and now are rising slowly each year. While Michigan on my side of the lake is an unending sea of dunes, the North shore of superior is a dense forest of stone. Stony cliffs, rocky shores, and steep terraced stone beaches are the landscape. Though there can be deep bays with tiny streams and marshes with moose, it is more likely to see gulls and loons. There are no roads anywhere near Pukaskwa, highway 17 bends away from the park for over 50 miles in every direction. When sea kayaker’s dream of being able to paddle for days on end without seeing people, or threading their kayak between narrow chutes of rock, seeing wildlife, and a dramatic landscape, they probably mean Pukaskwa. This is where you will add distance to the trip.

There are no designated campsites per se, there is park land and crown land, and you pay fees for each and camp where you find space. Leave no trace obviously. But the general idea is that it is wilderness in the true sense. The other trips on Lake Superior have boundaries, Apostle Islands, Lake Superior Provincial Park, and Pictured Rocks, Grand Island, Isle Royale, they all have park rangers and rules. Pukaskwa is something different. It just has an end and a beginning, but nothing in the way of support in the middle. This is what makes it so appealing, but also somewhat unattainable. I am often surprised that more people have not done the trip. Maybe that’s ok.

In 2003, when I knew next to nothing about kayaking except how to eskimo roll and paddle forward, I went on my first really sizable trip in Canada. We paddled from the Pic River to Pukaskwa Depot. The trip had so many high points with beautiful islands, rocks, waterfalls, and wildlife it is a whole story on it’s own.

I burned my leg with my boiling water from my camp stove in horrific infamy on the next to last day. This is where I discovered how unsupported we really were. A 2nd degree burn over most of my right leg resulted. Luckily we were only a few miles away from where we were going to get pulled out by a boat we hired in Wawa. This tug, Andersens is a fishing tug that sometimes runs paddlers and drops them off for money. It traveled through the night 6 hours to come get us.

I saw the remaining shore from the side of the tug sitting bandaged on the rear, Gulls chasing the boat hoping for fish. I wanted to come back. From the moment I got on that tug.

This year, after having done a number of symposiums every summer, and now taking on organizing the Gales, I thought long and hard about what to do with my paddling time. I decided I really wanted to go back and do the whole shore line between Pic River and Michipicoten. While a 10 day trip doesn’t sound like that big of a deal when you think about a trip around South America, or circumnavigating Vancouver Island over 30 days, it certainly will be a big deal to me. I look forward to the challenges and the idea of possibly the best wilderness trip there is in the US.

Plus I get to go on the trip with some dear friends.

Luckily we will have Naturally Superior Adventures, (who is also sponsoring the Gales this year), to spot our cars.