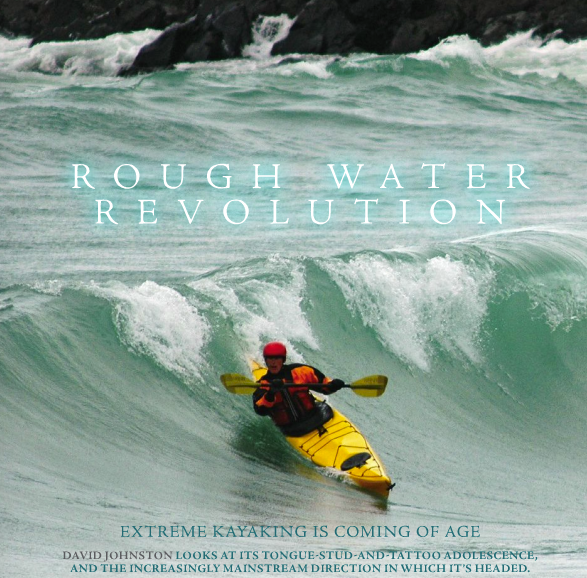 The summer issue of Adventure Kayak Magazine has hit the shelves. Go Kayak Now! Editor in Chief – Keith Wikle (I feel funny referring to myself in the third person, but oh well) was interviewed by Paddling Instructor’s (my erstwhile brother from another mother), David Johnston about the state of rough water paddling, and the future of the endeavor.

I feel honored to be asked my opinion about the history and state of sea kayaking rough water. Playing in textured water is certainly what I live for so I would be lying if I didn’t say I felt strongly about it. Not sure how, but I neglected to pitch Tiderace’s park and play designs Xcite and the Xtreme as well as P&H’s excellent Delphin and Aries.

The discussion point of the article is around what caused this boon in sea kayak rough water play: gear, skills, boats, or new action DVDs like This is The Sea, or Pacific Horizons? And is it good or bad?

The answer I arrived at was kind of all four. The introduction of better immersion protection from Kokatat allowed people to push themselves further and have fun getting wet. There was an influx of good training around the 1990s from American instructors who embraced the BCU and their focus on paddling and assessing coaches in the conditions they would be likely to take students into. Justine Curgenven and Bryan Smith have certainly helped immortalize and personalize the fun of rough water sea kayaking by placing the action at boat level. Justine’s raw enthusiasm got a lot of people fired up about sea kayaking, including me, and Bryan Smith has kind of gone very art house with lots of high quality small projects that focus on the athletic nature of kayaking, like the season. And finally the evolution of boat designs towards a kayak that could be paddled over distance and then surfed on standing waves, moving ocean waves, or even just on lumpy water.

There is some debate in the article about whether rough water paddling has been good or bad for the image of the sport. While I understand that we don’t want to frighten new paddlers away with a heavy focus on images of frothy seas, high wind, or steep seas, it would be a disservice to the sport and to students who would focus on building the skills and confidence to perform well in real conditions to only show them graybeard’s in tilley hats paddling on glassy ponds all the time.

It feels a little funny to be asked anything about the sea kayaking’s past. Mainly because I was just at the 22nd Annual WMCKA Symposium with Ken Fink of Maine who was the first Valley Canoe Products importer and distributor back in the 1980s, and who now reps Epic and Feather Craft. Ken has been involved in paddling so long he has an anecdote for everything, and I it was awesome to see Ken celebrated at WMCKA by being the guest speaker and instructor.

Check out the summer issue, and many thanks to David Johnston for the excellent article on rough water paddling.