Rarely do I get to sea kayak twice in one year along dramatic ice cliffs. This winter was especially harsh. We had serious snowfall throughout January and February. My sea kayak trip along the ice in January yielded some very intense photographs of the ice cliffs rimed with frost. Doug and I got to see a lot of amazing caves and very dangerous looking dangling icicles. 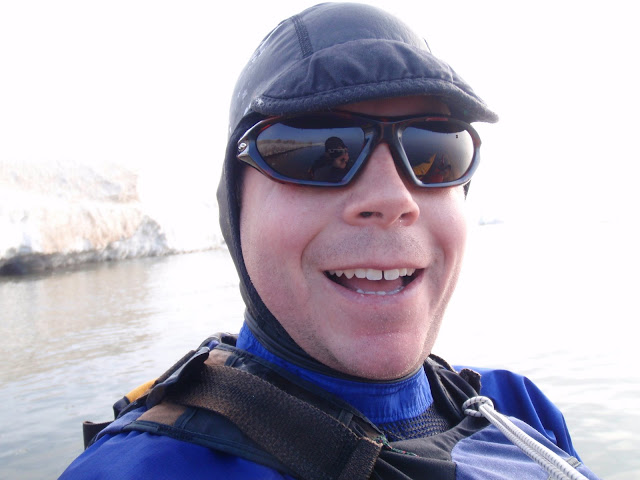 This second trip happened to coincide with a very beautiful bright day of sunshine with air temperatures in the high fifties. John Fleming and I played a little hooky on friday to take full advantage of the weather. We chose South Haven this time instead of Saugatuck. I was glad we did.

It was so warm I elected to risk not wearing my drysuit. The air was cooler over the lake. However the sun burned off all the fog caused by the melting ice and snow on shore. We launched our sea kayaks in the Black River in South Haven and paddled out of the channel in relatively short order. The wind was off shore at about 10 knots. The southern shore looked like it had more brash ice tucked in to the cliffs. Based on this we elected to head north where there was no brash ice.

Brash for those new to the ice is the term used in marine environments for ice that is loosely packed of ice that is either melting, or reforming into solid surfaces. If you ever see a time elapse of ice melting and reforming you will note that the ice forms from brash, to giant pancakes that float around until they all join into a solid surface.

The cliffs we paddled along had tons of sand embeded in their outer edges from the beach. Most of them were around 12 feet high. But in extreme cases we found some cliffs of ice that exceeded 18 feet. It is entirely surreal to be paddling on the Great Lakes along beautiful cliffs and bergs of ice that tower over you next to sandy beaches and condominiums where volleyball nets lay tangled in melting snow banks. The harsh winters we endure do have some paybacks in a dynamic landscape to nose your sea kayak around on a warm spring day. I really enjoyed bringing some one who had not seen it before. You always get to see it again as if it is new.

As usual I got out and hopped around. I seal launched in reverse off of this ice island. Good Fun. 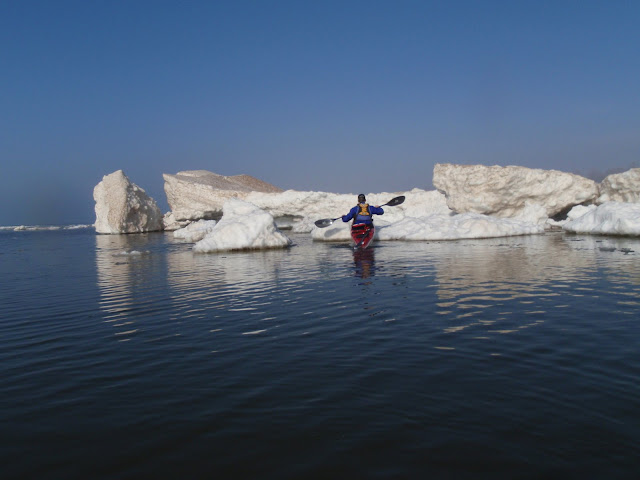 We did have two very alarming experiences that one should note for safety.

One
As it warms the ice is melting and high cliffs are precarious when in melt. We witnesses at least three calving bergs that had absolutely no warning. It is not like it looks on tv folks. There is no giant groan of the glacier like an old man’s knees creaking before a giant slab of ice falls off the main shelf. They literally break off and fall in less than a few seconds. It was great to get close, but afterward we discovered we were really too close based on the bright sunshine. One particular slab the size of a very large truck fell right behind John immediately after this photo was taken. 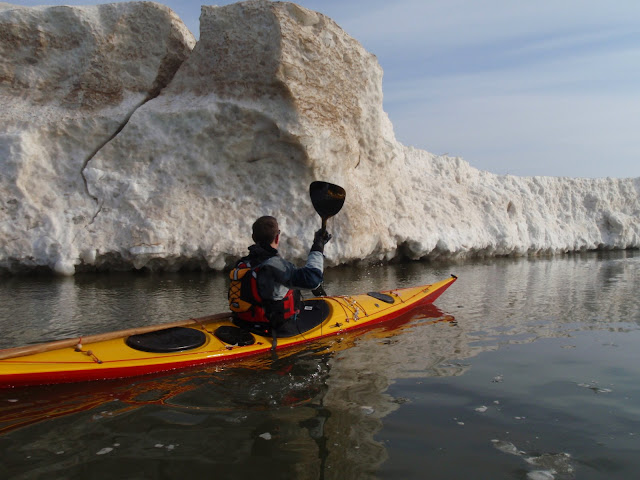 Two
I remember reading Jon Turk’s Cold Oceans and hearing him say that very subtle shifts in the wind can dramatically change how the ice shifts in a very short amount of time. Jon and I noticed that the wind was pointing a little of the north as well as the east. While we were paddling north this didn’t seem like a big deal. However once we paddled south to head home, the brash ice all packed in against the cliffs. So we were forced to fight through some of the brash and the pancake ice to open water we could spot on the horizon. This felt a little frantic, and perhaps foolish considering Jon kept asking me, “So what happens if the ice moves back in from the open lake.” You’re hosed is what. We got a little lucky that there was open water and bright sunshine. We only fought against the ice for about 10 minutes. 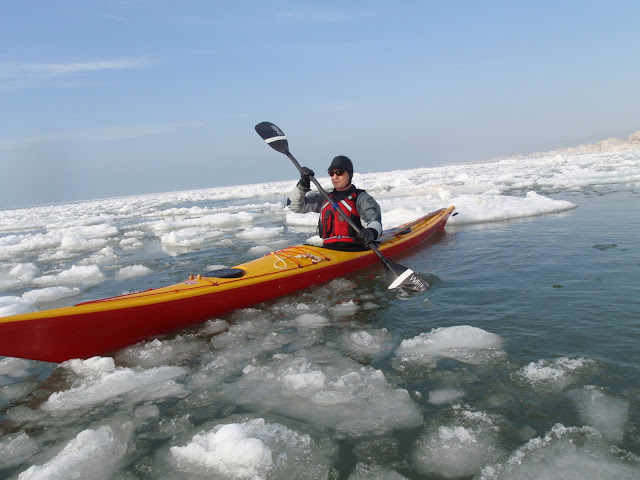 We finished off by rolling a couple times in Lake Michigan. It was great to get wet after paddling the Superfund sites where I had that feeling my boat my be ruined by the Kalamazoo River.

I feel very fortunate to have gotten out to see this scenery twice in one year. Ray Boucher of Naturally Superior Adventures near Wawa reported to me on Facebook that Lake Superior is still frozen solid. Hold tight Ray, it’ll melt.

Check out all of John Fleming’s Pictures of Sea Kayaking in the Ice. I forgot my Pentax. But John and I passed the camera back and forth during the trip.