What is surf kayaking?

Surf kayaking at it’s simplest is the pursuit of catching fast moving ocean waves. The idea is to be able to get the kayak planing on the face of the wave and to be able to surf like a board surfer would, but while sitting down in a kayak.

Surf Kayaking as a sport has been around as long as there have been kayaks. The competitive sport with dedicated craft didn’t get started until the mid 70s. The surf shoe was the first kayak used for surfing ocean waves in the mid 70s. P&H used to make one, the picture below shoes an old surf shoe hull. A more detailed history of surf kayaking in the UK can be found here.

What is a surf kayak?

A surf kayak strictly speaking is a kayak specifically designed for surfing moving ocean waves. That is to say waves that form based on ocean swell meeting the underwater topography. This can happen on the ocean and in our very lucky case the Great Lakes.

A surf kayak is a kayak that is specifically designed to surf ocean waves like a surf board that you sit in.

A surf kayak typically has the following basic components:

There are three basic types of surf kayaks:

Here is an image of a High Performance Surf Kayak explaining the various aspects of the HP style of surf kayak.

Here is an image of an International Class Surf Kayak explaining the various aspects of an IC Style surf kayak. 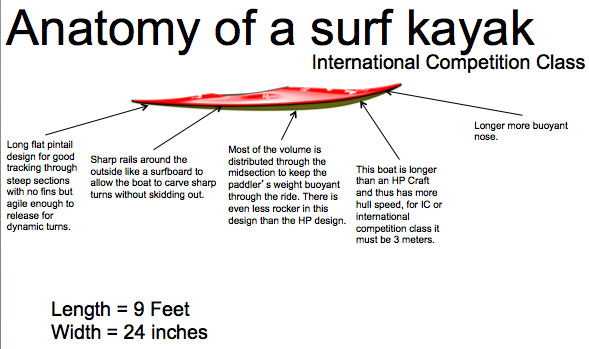 What is a Waveski? 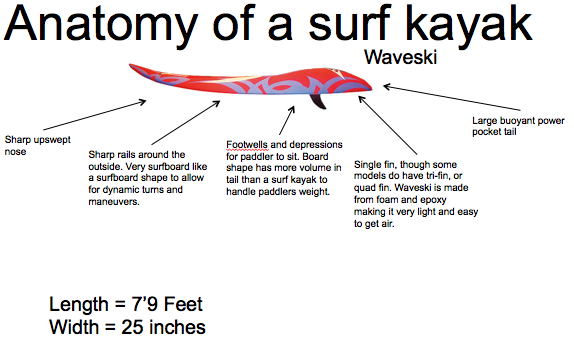 A waveski is a sit on top surfboard you paddle in waves for lack of a better definition. They are shaped exactly like a surfboard on the bottom and the sides. They do however have some modifications on the top side where a slight hump is given at the rear for added volume when catching waves, footwells for your feet to strap in, and a slight depression for your rear end. Paddlers often strap both their feet and the laps in with belts to maintain tight contact with the waveski.

Waveskis are often made of foam and epoxy. Making them light and stiff with very surfboard like performance. Many paddle surfers prefer waveskis to sit inside type surf kayaks for the surf board like performance as well as the ability to simply bail and climb back on in the event of a mishap while in the surf zone.

Great Example of a waveski video, it has some instructional content in French.

Can I use my white water play boat to surf ocean waves?

You can use a white water boat to surf ocean waves, it however does not have the same shape as a surf kayak and will likely not have enough hull speed to catch and start planing on a fast moving wave. Often whitewater kayaks pearl and end up doing an ender, or cannot maintain enough speed to stay in the power pocket. A dedicated surf kayak is really the best option for dynamic surfing.

A note about Tidal Race Surfing

Tidal race surfing is about surfing standing waves, and not moving waves. I say moving because standing waves can form on the ocean in much the same way they do on rivers from tidal races. Tidal race surfing is a sport almost on its own that has been well documented by sea kayakers the world over. Notably Justine Curgenven of Wales, and Brian Smith from British Columbia. These film makers have filmed some of the world’s largest tidal races and some very talented paddlers in sea kayaks surfing them. This is however not the type of surfing to which I am referring.

Within the last 10-15 years surf kayaking has grown in popularity in both Europe and the United States. There are annual competitions every year in the United States and in Europe. The most prominent surf kayak competition is the Santa Cruz Surf Kayak Festival. The World Surf Kayak Championships are held in different locations each year around the world, the US will be fortunate enough to host this competition in the Outer Banks of North Carolina in Autumn of 2011.

Surf Kayak Competitions are judged in much the same way as board surfing competitions. Competitors in different types of craft and age groups gather to compete. Surf kayakers compete in groups or heats to try and grab as many quality rides in a specified amount of time in order to score.

The surfer who catches the best waves in a heat and performs the most dynamic moves that for the judges wins.

This is the first in a series of articles on Surf Kayaking. I have more content coming on competitions and maneuvers in the near future.