Check out the encore video of I’ll Believe in Anything!!!

I saw Wolf Parade live back in 2006. Wolf Parade played the the now Defunct Kraftbrau brewery. It was a fantastic show, probably one of the best shows I’ve ever seen. The Crofoot show was also excellent. I brought Gabriel (my 11 year old son) despite me saying I didn’t think I should take him to this show.

Gabriel who has listened to all of Wolf Parade’s two albums, and all of the Sunset Rubdown material really wanted to come. He was actually even better behaved for this show than he was for the other two. Not that he did anything wrong at the last two, he was just more engaged. He was dancing like a maniac and singing along, people in the crowd kept giving him high fives, and cheering him on. I told him not to get too big of a head about it. But I doubt that sunk in.

The show consisted of a good mix of the first Album, Apologies to the Queen Mary, and the new material from At Mount Zoomer. (Set list is below). The dynamics of the band are essentially the same as last time, except that Dante didn’t get an allergic reaction to something and have to be rushed off to the hospital like he did last time. 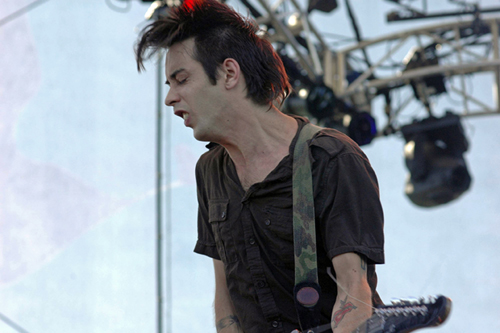 My main observation is that Dan Boekner, the guitarist and singer may be part of a dying breed. He is so not phoning it in. You rarely get to see a band get into it anymore. Folks are so laid back, so casual, that to seem enthusiastic might be seen as unhip, uncool, and passe. I applaud Dan’s spastic twitching, and spasmodic jerking around on stage. This is why you go to a show, to feed of all of the energy. Rock and Roll is about the angst, the anger, the happiness, and the bombastic enthusiasim. That is what I go to see, not to passively watch some aging hipster lull me to sleep. So hopefully not too many people show him the guitar face he is making in this picture.

A lot of credit and interest the media seems to go to Spencer Krug for Wolf Parade. Spencer is terrific. The dynamics and the energy for Wolf Parade seem to come from the different approaches to song writing and performing. Spencer seems more verbose, prosaic, and maybe even a little Joycean in his approach to song writing. Without making a wild analogy, he almost seems like Edward Ka Spel from the Legendary Pink dots, or dare I say it a young Peter Gabriel. And Dan Boeckner seems more focused on straightforward punk rock in the vein of Fugazi, The Clash, The Jam, Iggy and the Stooges, or any number of other guitar bass and drums arrangements. I like both of these, but the meshing of the two seems to make it a one stop shop. Without Dan Boeckner, this band would just be a rocky version of Sunset Rubdown which might be interesting, but not as good. Now that I’ve said the punk rock thing about Dan Boeckner though, it must be said that his Handsome Furs side project has a lot of synthesizers and electronica. But it is more the energy than the instruments used.

The sound at the beginning of the show was a little off, we were getting all bass and no vocals. I think it had to do with being at the back of the audience, where the bass had all the walls to bounce off of. I told the audio engineer, and she seemed to correct it pretty quickly.

The highlights from the show for me were hearing the new songs from At Mount Zoomer, which didn’t initially hit me. But Apologies for the Queen Mary was the same way. I really enjoyed Call it a Ritual and Soldier’s Grin live. I always love This Heart’s on Fire and Shine a Light as well. The encore was stunning with a blending of I’ll believe in Anything, and Fancy Claps. To further drive home the push-pull effect of the band here is another video, (unfortunately not from the crofoot).

Anyone who’s worked nine to five knows this pain: