Doug emailed me about paddling and I immediately checked to see what the ice conditions would be. The ice cliffs looked impressive from the lake cam. When we showed up at the launch spot, the usual concrete boat launch was choked with snow and ice. So we moved down a block and launched from a rocky area where the ice wasn’t so thick. The Kalamazoo River was high and moving about quadruple the normal flow.

The wind was forecasted for 10-20 knots out of the east. Offshore winds on the Michigan side of Lake Michigan are unusual. But the offshore winds were probably somewhat responsible for the bright sunshine and relatively temperate conditions.

Once out of the channel Doug and I found that the shore had stacked cliffs and caves that reached above 16-18 feet in some places. In the past few years I have paddled in the ice it has been smaller along shore, 8-10 feet at the highest. The early date of this ice paddle probably contributed to the dramatic scenery. Beards of ice cut by the wind flew south like frozen flagpoles from an obviously prevailing north wind. The caves near the pier were especially impressive.

We paddled our sea kayaks into every available nook and cranny we could, finding many icy deep caves, coves and sea stacks as we paddled. Icicles formed solid stalactites along the roof of the caves. Luckily it was calm so we could paddle into their recesses with impunity. At one point we found a beautiful isolated island that stands out as the most impressive stack I have seen to date. It had solid glistening surfaces and was easily 18 feet tall. 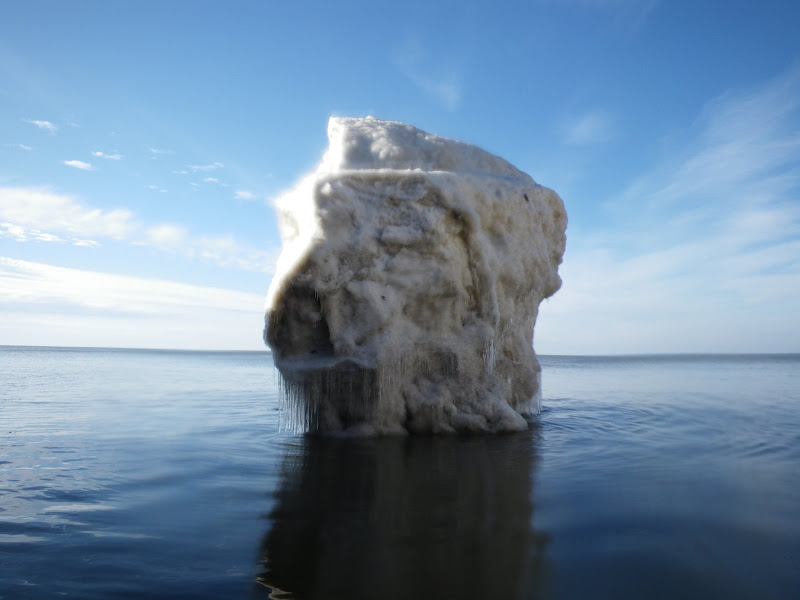 Doug and I paddled almost to Glen along the shore. Once we turned around we also stopped and got out on the ice for a rest break. I managed to take a photo or two from the ice before getting back in.

We spotted some Duck Hunters out along the ice and managed to attract their attention prior to being fired upon. They passed us in the channel almost as we were at our take out spot.

The trip back and up the river took four times as long as the way out. With the wind and the current against us it was quite difficult to make progress. And like a fool I forgot to pack an energy bar. So I was bonking hard from lack of food. I could feel lactic acid building up in the outside of my shoulders. Eventually we made progress up the channel. I was whipped when we got out and then immediately went to the store to buy food!