Sea Kayaking Rescues really have a lot of variation on the theme of getting a victim back in their kayak. The basic premise is that with the aid of a paddling partner, the victim can have an empty sea kayak and scramble back inside.

There have been several new videos of variations on the t-rescue or eskimo rescue.

These innovations are all necessary and all good. Without experimentation and the willingness to try something new, the sport is going to stagnate.

Have a look at this Video of the Bow Roll Rescue:

Next have a look at this: Video Ladder Style Assisted Rescue for Sea Kayak. This WMV video (sorry no youtube embed) is courtesy of Rock and Sea Productions.

These two videos are similar in that they are relying on the rescuer to hold the victim’s bow. Both of these videos have merit. But they also have one big detriment. They can only safely be performed on flat water. The crux of the issue is actually not for the victim, it is for the rescuer. The rescuer still in his boat, must grab the bow of the victim’s boat and either hold it, or rotate it.

Most rescues are not performed on placid lakes with no wind or waves. They are usually performed in lumpy, cold, and windy conditions. Granted adrenaline can take care of quite a bit. If the rescuer is holding the bow in those lumpy conditions, the bow is going to be bumping around near your face for a lot longer than the time it takes to draw and empty a kayak and then bring it around side by side.

You could end up like Doug Van Doren who despite years of training and experience managed to catch a bow in the face merely from trying to draw the kayak across his deck: 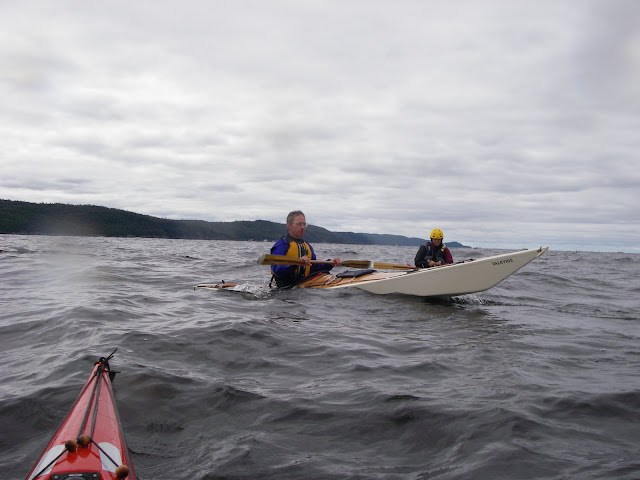 Taking the side by side option, which is albeit a little dull, also gives you time to assist with pumping. The rescuer is checking out the victim for signs of hypothermia, shock, head wound, and assisting with getting a spray skirt back on. Side by side rescues also give more limited exposure to the long pointy ends of dangerous kayaks in the surf.

Continuing to innovate and try new things is what will help the sport grow. Testing them in moderate conditions should prove out techniques that work and techniques that don’t. One of the prime directives for safe paddling at sea is that the rescuer should not be putting themselves at further risk, lest you have two people in the water instead of only one.